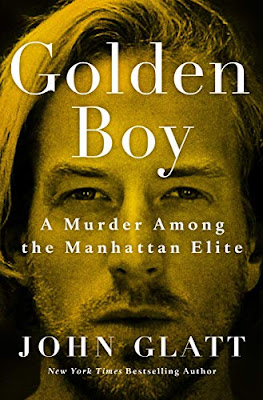 First off, I love this author's writing style.

I first discovered him when I read  his book on Chris Watts and I was thrilled to see that Golden Boy was coming out.

This book has a hugely difficult subject matter . Thomas' (the Golden Boy) actions were so "out there" that at times, I had to put the book down and just walk away for a few minutes.

The author does an excellent job of balancing the real life results of a real life mental illness.  I like that he does not take a side, other than to write the facts about what happened and let's us decide.

Many times during this book, I kept asking myself is "Thomas really mentally ill or is he faking?"  I came to believe that both were in play here. He could be conniving, while being completely in his own world.

I also wondered how his poor mother could still  be standing after. all these events.  Glatt did an excellent job of describing her feelings, in most of the situations and while I am really annoyed at her comment about "the system did not help her son", I could only imagine her pain.

That statement...."the system let my son down"=== I absolutely believe because we hear this comment so many times when it comes to mental health, I will say however, that in this case, with the money these people had, they could have hired the "best" doctors to help him, but instead they just kept throwing money at their son, making him entitled and needy - not great when mixed with mental health. issues.  These people appeared so scared of "hurting" their son's feelings.....so I believe that the family holds some blame here.  They HAD the money to do something beyond the "regular channels of mental help for the average person".

The book reads like that to me.  Thomas was always on the periphery of things, living lavishly and the author really shines a light on this as well.

Ultimately, this is a really well researched book that is sad to read.....but what a good read.