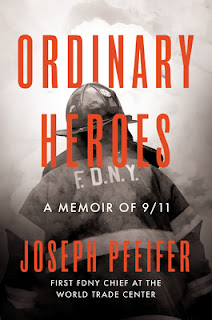 Thank you to Portfolio and Penguin Publishing Group for sending me an e-copy  of this amazing book to read and review.

What an amazing read.  I basically read it in three sittings, including late at night, which made me gave me dreams about 9/11,

I can hardly believe that this year is the 2oth anniversary.  I remember all of it like it was yesterday. I am sure that those directly affected by 9/11 have spent many days/weeks/months and years thinking about this senseless attack.

I am Canadian and did not know anyone in the towers or planes, but, being so close to the anniversary and reading this book, I now have a new understanding of events, thanks to Joseph Pfeifer,  someone who was right there for ALL of it.  I have always heard that in moments of crisis, "look to the helpers" and nowhere is this more obvious than during 9/11.

I actually remembered Pfeifer's name from seeing him in the documentary - 102 minutes.  Pfeifer does actually talk about the filming of this documentary, which is the only "real time" 9/11 movie in existence. He also does an amazing job of going through the events of the day, by giving us just enough  details.

The book basically starts on the morning of (who hasn't seem the clips of Pfeifer, on the streets of NYC, hearing a plane and looking up in time to see it crashing into the tower?  What follows is a harrowing, far from glamorous look,  at what happened.  What makes this so compelling is the fact that coupled with the description of events, we get to read and feel Pfeifer's thoughts, feelings and actions in real time.

There is, maybe, one sentence in passing attributed to the terrorists and later in the book, he does speak about Bin Laden and I am amazed that he kept the narration on point - i.e. no terrorist will break the spirit of first responders and the people of New York.

I absolutely loved this book.  I just wish this was fiction and not reality.

RIP to all who died on that day and to those who are still dying every day because of exposure to toxic elements.